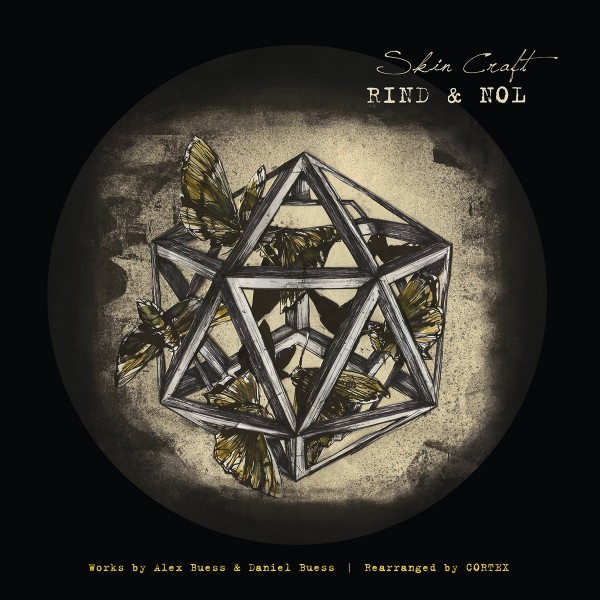 RIND is a work using three large self-built cow skin frame drums, 1 horse skin container drum, metal plates and electronics. NOL is a composition by Alex Buess for a percussion trio from 1995. The two pieces were recorded live in 2010 and 2003 respectively, also featuring the musicians Daniel Stalder, Peter Conradin Zumthor and Matthias Würsch. They were electronically treated by Cortex in the studion in 2015. This release continues the collaboration with Alex Buess that goes back to the pre-Praxis days of the Vision label since 1987 and includes Praxis 31 by 16-17 and Praxis 48 by Cortex, both of which also included Daniel Buess.

Cover art by Darkam and layout by Lynx.

ALEX BUESS – is a musician, saxophonist, composer, producer who lives in Basel, Switzerland. He has collaborated with Stephan Wittwer, Paul Schütze, Kevin Martin, Peter Brötzmann, William Parker, Raoul Björkenheim, Toshinori Kondo, Bill Laswell, Kevin Shields, Tim Hodgkinson, Michael Wertmüller and many other musicians in the wide field of improvisation, electronics, electroacoustic music and composition. He plays/played in the groups ICE, GOD, Phantom City, The Bug, Sprawl, Cortex and his own group 16-17, as well as Melx and The Electric Noise Twist. The latter were part of a close collaboration with Christoph Fringeli’s Vision label from 1987-1991, before Christoph moved to London and started the Praxis label, a collaboration that continued over the decades with releases by 16-17 and Cortex on Praxis.

Alex has written compositions for various contemporary music ensembles and also works as a producer and sound engineer. He has appeared at numerous new music festivals and his compositions are performed in Europe and throughout the world. His studies include electronics, acoustics, musicology, phonetics,semantics and composition and his work reflects his experiences with electronic technology, written contemporary music, film music, new mixing and production techniques and computer music.

DANIEL BUESS - studied at the Musikhochschule Basel with Siegfried Schmid and with Isao Nakamura in Karlsruhe. Studies in traditional South Indian percussion music, specially the Mridangam from 1995 till 1998 and in Arabic percussion music in Cairo, Egypt from Nov. 2007 till Jan. 2008. Daniel was involved in various groups and ensembles in the realm of experimental and improvised music, like “Ensemble Phoenix Basel” of which he was a core-member and solo-percussionist since its foundation in 1998, Cortex, 16-17 (both with Alex Buess), HOW2 (with the percussionist Daniel Stalder), “Katarakt”, “B&B” (with the flautist Christoph Bösch), MIR (with Papiro and Michael Zaugg), Buggatronic (with James Hullick). Other collaborations include artists like Hany Bedair, Knut Remond, Zbigniew Karkowski, Kasper T.Toeplitz, John Duncan, Michael Wertmüller, Phill Niblock, Julio Estrada, Stephan Wittwer, Volker Heyn, Thomas Lauck, Tim Hodgkinson, Iancu Dumitrescu and many others.

At his regular tours through Europe, Asia and Australia, he performed at the most highly recognised festivals for experimental music as well as at several underground-places, open spaces and independent venues. Sadly Daniel passed away in February 2016, making “Skin Craft” unexpectedly a posthumous release.