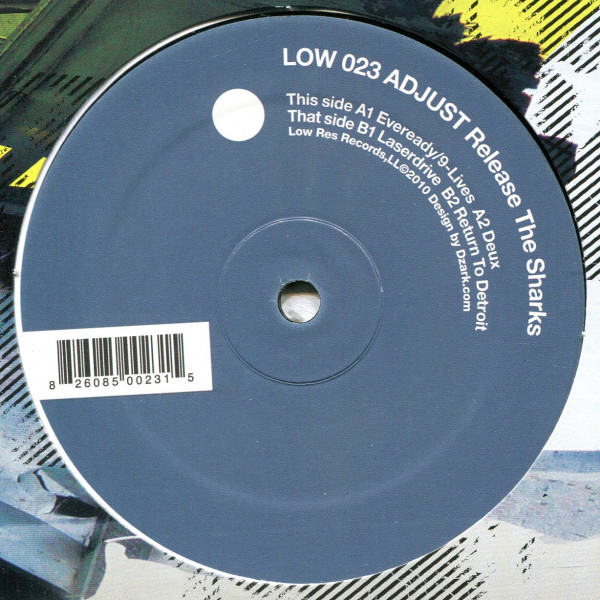 As 2010 draws to a close, Low Res Records makes one last shot at the buzzer with a veritable milestone of mayhem, the 23rd enigma in the shape of a new and long overdue DJ Adjust record.

‘Release The Sharks’ is a four tracker of abusive speaker therapy constructed in the spirit of recreational headbanging most would call haptic technology for heshers.
Possessing the demonstrative power of potential that pokes at the ear pupils, the new Adjust record is a leaning tower of rhythm inconsequentials that cast a dark shadow over the deliberate composition of controlled chaos. A study in pure acceleration from the opening track ‘Eveready/9-Lives’ and it’s nod to Frances Tipton Hunter and his black cat, to the track ‘Deux’ which draws subtle influence from early Fischkopf releases taking cues from industrial appliance rhythms that swell into monstrous episodes of hi-fidelity gate crashing. Distorted electronic kick drums translate into rarified air violence and simultaneously unleash the Kraken bass blasts. Zeus and his harem of honeys would be proud. A true modern Midwest exercise in reticent aggression. Varying tempos of grindfunk sonically spread over four tracks of fortified ass-kick. This is
popular music for the future prolific and stratopunk pioneers of tomorrow… delivered today.