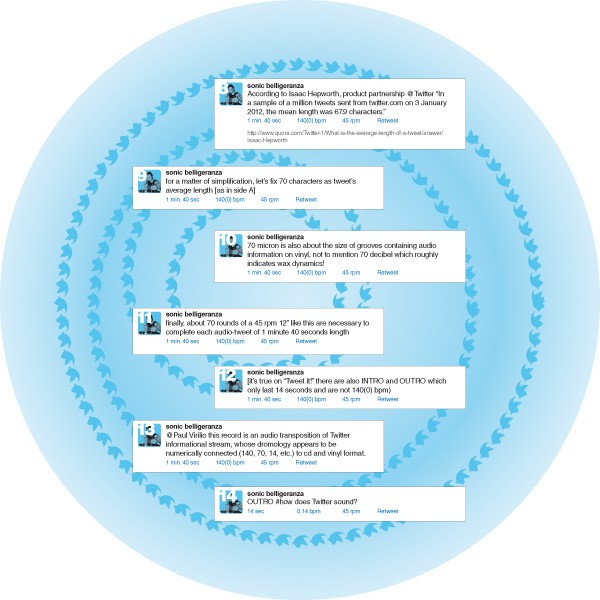 2) @Paul Virilio creating an audio stream of the ]complete[ Twitter dataflow. Let's start with a simple calculation of  volume:

5) it is reasonable to assume that Twitter produces an average of 2600individual tweets per second.

7) @Paul Virilio IN SHORT: TWITTER CURRENTLY PRODUCES ABOUT THE sameAMOUNT OF DATA PER SECOND (1.456.000 bps) AS A CD PROVIDES PER SECOND

8> According to Isaac Hepworth, product partnership @ Twitter "In a sample of a million tweets sent from twitter.com on 3 January 2012, the mean length was 67.9 characters."

9) for a matter of simplification, let's fix 70 characters as tweet's average length [as in side A]

10) 70 micron is also about the size of grooves containing audio information on vinyl, not to mention 70 decibel which roughly indicates wax dynamics!

11) finally, about 70 rounds of a 45 rpm 12″ like this are necessary to complete each audio-tweet of 1 minute 40 seconds length

13) @ Paul Virilio this record is an audio transposition of Twitter informational stream, whose dromology appears to be numerically connected (140, 70, 14, etc.) to cd and vinyl format.