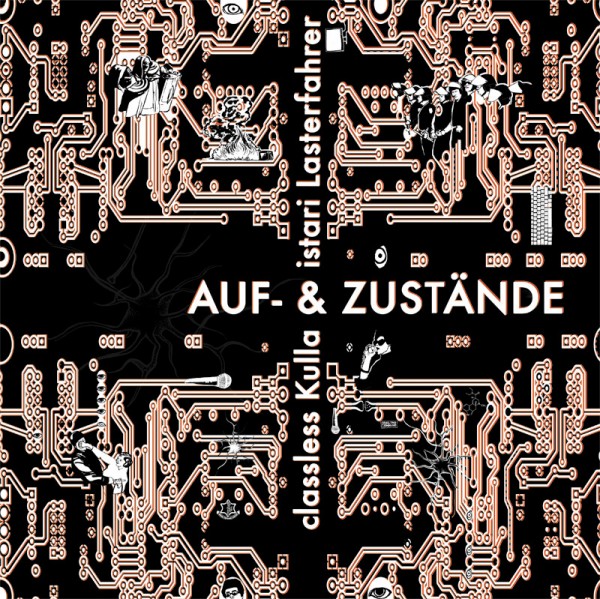 This product is currently not available.
Please inform me as soon as the product is available again.
€10.00 *

After the full length cds “Nein, Nein das ist nicht der Kommunismus” and “Wir hatten noch was vor” classless kulla and istari lasterfahrerare now here with their third release in a row. as the previously releases been quite a big weight this release only covers 10 tracks, but this time, instead on digital compact disk it materializes as vinyl record and download.

the main theme of this release is insurrection and mental states or lets say conditions ( the titel translated is something like this in a way ). anyway the record starts up with a amen punk stomper followed by a more idmsk break track with a tripping lead sequence. third track is a wild amen basher also thats leaded by a dirty acid line. the fourth track is more between drum and bass and indy guitar thats slanted into metal or something like that. last tune on side a is a more lecture aural exerimental track where kulla is talking about the conspirity of the brains.
flipside starts with a track that sounds something between punk and orchestral metal, its a song about a red army snipper woman in the second world war. this track is followed by a tune about why there is no communism ( because there is germany ) – kinda electro track. the third one is a funny ska raggae tune about dope smokers and the fourth one classless talks about what is it to be him and what is it not. last track is a duett with oona about the live of working people.

vinyl record comes with full printed cover with lyrics on the backside and download code.