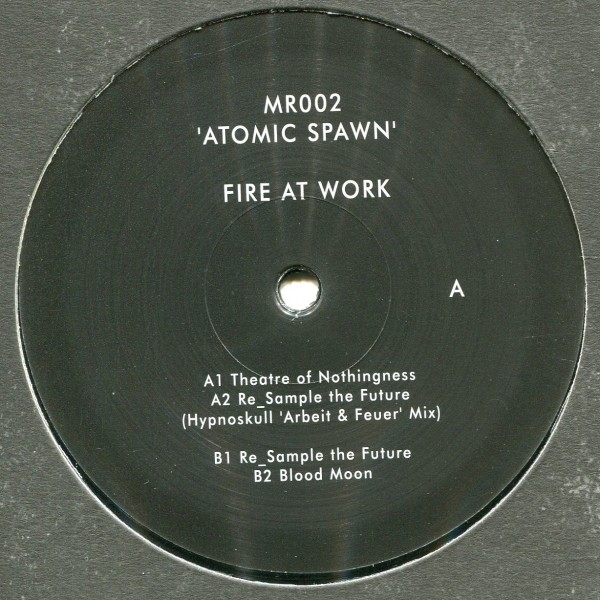 The third release on Monolith is by Fire At Work and inlcudes a Hypnoskull remix.

Label info: The sensational contribution of the Roman project Fire at work, risen over the millennium end, delivers the next 12″ release of the label.

The sounds and visions of the two producers are coming directly from the most radical electronic counterculture’s pot, the industrial dimension and the radical sound choice seem to be the best and right way to tell the story of a dystopian reality, a meaningful choice useful to criticise humans and their civilisation. The complex of the Fire At Work production represents an act of cultural resistance, therefore Monolith Records seems to be the right and natural follow up of a long multidisciplinary journey. This release is the meeting point of two generations sharing a similar electronic countercultural background, in the middle of the ruins of a modern world which is nothing but a ripped-off planet, a consumed scenario where the radicalisation of the exclusivity leads the beings to the recurring Post-humanistic alienation. The music journey develops through cuts deliberately violating the borders of genre and style, leaving to the dark decaying soundscapes the duty to shape coherence. The overall dimension of this work floats in a tension between the mental form of the synths and the implacability of the concrete drumming asset, that alternates straight and broken beats merged by the same obsessive character. In order to consistently remark the intention behind the production, the Remix by hypnoskull for ‘Re_Sample The Future’, a tool shaped by an heavy distorted timber that brings lyrics to clarify the common denominator of the EP: a totalitarian vision of reality involving the rejection of the status quo, together with the roles and the scopes of a totally dehumanised system. The 2.0 Man is unarmed and similar to a cadaver, and his desires and senses are reconciled by a perpetual stream of information, a data replacement of reality. The one way direction streaming can be interrupted by noise, as the element able to distort meaning the unexpected element occurring in the middle between the matrix of the message ed his audience. Given such conditions the style choice becomes part of the concept itself, and it is far from any kind of ‘induced’ choice.