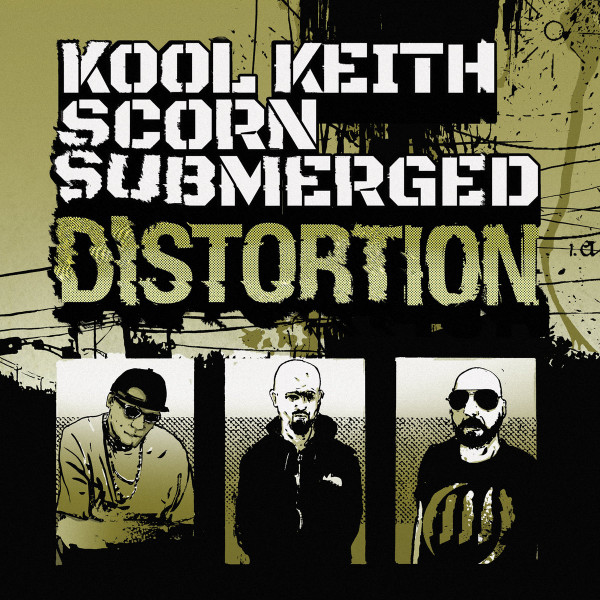 KOOL KEITH is the most legendary trailblazer of hip hop music. With characters spanning from Dr. Octagon to Tashan Dorsett to Black Elvis to Dr. Dooom, Keith is always delivering realness, spectacles in word and sound, and creating new worlds with his many auras. SCORN is the electronic beat project of acclaimed exNapalm Death drummer Mick Harris, the Dark Lord of ambient dub. Mick Harris’ prolific ventures across numerous projects include Painkiller (with John Zorn and Bill Laswell), Quoit, Lull, Monrella, and many more. SUBMERGED is the King of Underground Drum n Bass DJs, having pioneered the scene for the hard sound from Astana to São Paulo to Kiev to Brooklyn. He is the founder of Galactic Enterprise that is Ohm Resistance.

DISTORTION is a collaborative single with some of the 100% certified dopest Kool Keith verses. He is tuned into his co-authors, dropping lines about “Power sources, Mediterranean bosses”, going “52 states, European, Worldwide”, discussing “more power to explore”, and knowing how to “stick my hand out the speaker and reach y’all”.

A massive energy lioff occurs as Keith joins his multiverse with that of the Ohm Resistance artists.

Mick Harris’ instantly recognizable bludgeoning beat carries the weight, as he trades off bass blast duties with the organic overdriven bassline of Submerged. A warning shot fired in advance of Scorn’s album, “The Only Place”, this single adds the missing element to Scorn that brings out the richness and flavor of Mick Harris behind the mixing desk. “I’m so happy to be working with a great voice – I could do more of, it adds another dynamic to Scorn.” says Harris.

Submerged explains his usual streak of unusual luck – “I had a bassline I had written and wanted to send to Mick Harris for Scorn. When the opportunity came to work with Kool Keith, Mick made his beat, and my riff fit exactly – so we coordinated the forces to put this record together”. With Kool Keith being one of the most-named influences by many of the Ohm Resistance artists, his arrival to the label couldn’t have come at a better time – a integrated circuit across 4 dimensions, connecting 3 legendary musicians around the globe.