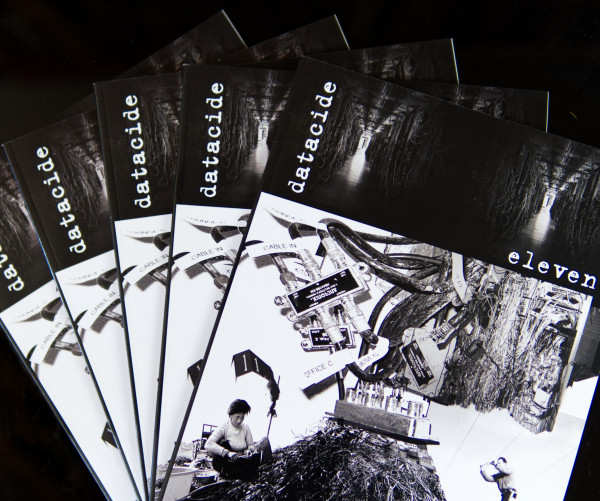 datacide eleven originally appeared in February 2011, a little bit over two years after the predecessor issue which had been published in October 2008 and had been accompanied with a conference in Berlin. Issue eleven contains some of the papers presented at the 2008 conference (those of John Eden, Stewart Home and Alexis Wolton) as well as then-new material. Between the two issues was the launch of a new datacide web site (then part of the c8 orbit, now to be found at https://datacide-magazine.com) and a number of other activities, largely event-based, both musical and in the form of talks, sometimes as a combination of the two. datacide eleven itself was launched with a number of talks taking place over two days at Cagliostro, the bar and meeting point at Ostkreuz - then also the location of the Praxis store - and a party taking place at Subversiv with Kovert, Baseck, DJ Balli, Cannibal Brothers, Nemeton, LT and Christoph Fringeli.

For this 2022 reprint the issue was carefully re-edited which chiefly concerned formatting issues. None of the content has been altered besides obvious typos and mistakes, but the layout had to be adjusted to the bound rather than stapled finish, and to take advantage of the colour (inside) cover and to give a bit more space to some articles a total of four pages were added. A new back page image was provided by Luke Hekate.