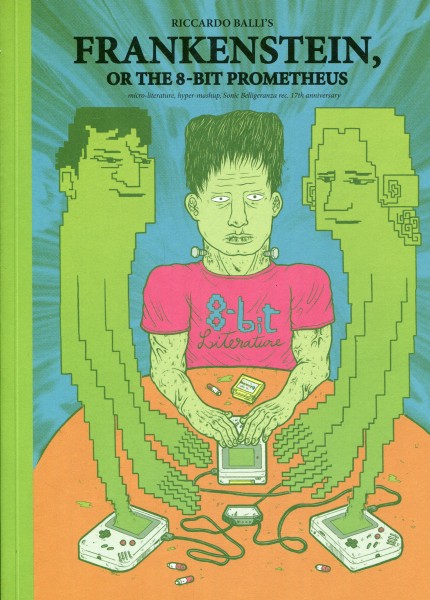 Finally in English, released by Chili Con Carne in Portugal!

2018 Frankenstein gone mad: the many horrifying uses of technology, such as Web 2.0 that encourages you to give your time and personal information up to faceless IT companies or worse…
This book is a mashup of Mary Shelley’s Frankenstein, videogames and Internet culture, of chiptune music, galvinism, taffelmuzik, real life accounts of ’90s gabber rave parties in Italy and a celebration of Bologna’s finest weirdo label SONIC BELLIGERANZA, whose 17 years of existence (2000-2017) this volume celebrates with 17 texts.

All written by Riccardo Balli who, having whistled countless 8-bit versions of famous pop songs and delighted his ears with chip-tune covers of black metal songs and classical music, now extends micro-music aesthetics to literature with this remix of Mary Shelley’s classic.

Through some sort of low-resolution séance, the author evokes the spirit of corpse reviver Giovanni Aldini (1762-1834), credited with having inspired The Modern Prometheus. Aldini tells a compressed version of the original Frankenstein story, exposing its language to retro-gaming jargon and simplifying the plot as if it were an arcade game. The aforementioned 18th-century electrifier was the nephew of eminent scientist Luigi Galvani, who lived in MIDIevil Bologna just like the author of this new classic.

Send him an impulse from your Game-Boy!
BLEEEEEEEEEEEP!