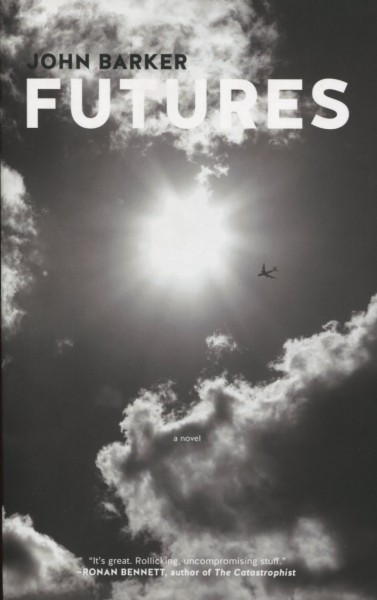 This product is currently not available.
Please inform me as soon as the product is available again.
€15.00 *

Description Evaluations 0
Description
Carol is a small-time cocaine dealer in 1987 London. She’s on her own with a young daughter, a... more
Close menu
Product information "John Barker: Futures"

Carol is a small-time cocaine dealer in 1987 London. She’s on her own with a young daughter, a good mother who is especially careful in her working life. For some punters, this involves being Simone. One of these customers is Phil, a financial analyst in the City who, with his longtime pal and fellow analyst Jack, fantasizes a cocaine futures market while on a coke binge. They look at it as they would look at any other commodity.

At the top of the wholesale business are Gordon Murray and his brothers, who have an “in“ with the Drug Squad and are prepared to shop anyone to keep it that way, on top of the violence they use as and when needed.

When the cocaine futures market becomes a reality, Carol has an opportunity to go for the big deal that could get her out of the business altogether. Meanwhile, a stock market crash creates havoc, and a once-in-a lifetime hurricane sweeps across London, ripping down trees and the communication systems of the stock market itself. Carol must make her choice, as three very different worlds are about to collide.

“In Futures, John Barker has produced a fast-paced, hard-boiled novel that pulls you back, effortlessly, into morally corrupt Thatcherite London. Barker’s crisp, laconic, prose, eye-for-detail storytelling, command of the art of narrative, and his ear for fluid and convincing dialogue makes him, in my view, Hackney’s worthy successor to Tom Wolfe.“
—Stuart Christie, author of Granny Made Me an Anarchist

“John Barker’s prose is so downbeat he leaves even the most gritty of crime novelists looking like they’re aiming for the preteen market. But if you want to get beyond the fairy tale version of the sordid underbelly of life, then you gotta check Futures out.“
—Stewart Home, author of 69 Things to Do with a Dead Princess

“In this fast-paced, streetwise take on eighties London, boundaries blur between the cocaine trade and newly deregulated financial markets. High and low life don’t look so different, as everyone tries to make a killing. Barker’s portrait of a cynical, money-hungry culture skewers a moment in history that for good or ill (and mostly for ill) made Britain what it is today.“
—Hari Kunzru, author of The Impressionist

“The prose grabs you by the throat and squeezes. The characters are by turns reckless, ambitious, vulnerable, and weak. The story is set in the past but couldn’t be more relevant. Futures is funny, frightening, and very dark.“
—Ronan Bennett, author of The Catastrophist

John Barker was born in London in 1948. In 1972 he was convicted of conspiring to cause explosions in what was called the Angry Brigade trial. He served a ten-year prison sentence and is the author of Bending the Bars, a memoir of his prison time. He worked as a dustman and welder before being implicated in a conspiracy to import cannabis in 1986. In 1990 he was finally arrested and served a five-year sentence. Since then he has worked as writer and book indexer.