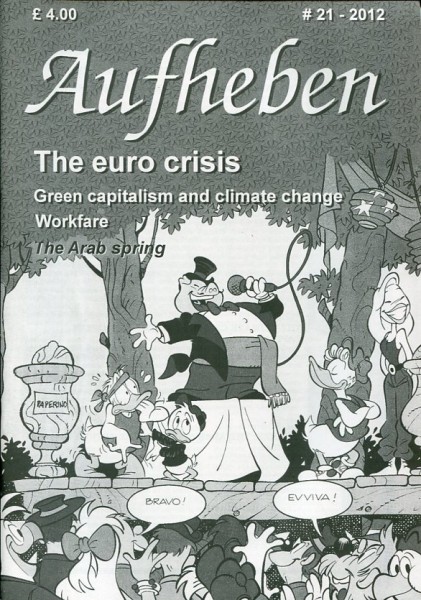 EDITORIAL:
THE ‘NEW’ WORKFARE SCHEMES IN HISTORICAL AND CLASS CONTEXT
The government’s ‘new’ workfare schemes are one part of a massive programme of welfare reform, backed up by an unprecedented ideological attack on the ‘undeserving poor’. The schemes, which have been attacked for their treatment of many of the claimants forced onto them, are the latest in a long line of attempts to ensure the unemployed function properly as a reserve army of labour.

THE EURO CRISIS: TAKING THE PIGS TO MARKET
For more than two years we have seen the politicians and policy-makers of Europe repeatedly involved in frantic and often fraught negotiations to find an agreement to resolve what has become known as the euro crisis. Certainly the euro crisis has been a ‘crisis too good to miss’ for the European ruling class. It has provided the opportunity for governments across Europe – not just the eurozone – to push through sharp cuts to public spending and the welfare state and to accelerate privatisation and neo-liberal reforms. In this article we shall give an account of the unfolding of the euro-crisis since the end of 2009. We shall also consider the explanations concerning the causes of the euro-crisis that have been put forward. Although these explanations may all have a certain element of truth, we shall argue that the euro crisis can only be fully understood if it is placed in the wider context of the tectonic shifts being brought about in the global accumulation of capital caused by the rise of China and the newly emerging economies of the global south.

THE CLIMATE CRISIS... AND THE NEW GREEN CAPITALISM?
The inability of the world's states to take decisive action on climate change makes a strong case for the incompatibility of capitalism's endless growth with finite ecological limits. However, this identifies the interests of capital per se with fossil fuels, and overlooks the emerging ‘green capital’ which sees averting dangerous climate change as an opportunity for new avenues of accumulation. While this may be too little to late, the struggles between ‘fossil’ and ‘green’ capitalists look likely to increasingly shape both capitalist development and geopolitics over the coming decades.

INTAKES: THE ARAB SPRING IN THE AUTUMN OF CAPITAL
Our Intakes article, from ‘Friends of the Classless Society’ (Berlin), contextualizes the recent tumultuous events in Egypt, Tunisia and Libya. The basis of the cross class alliances was their shared opposition to the dictators. Now the dictators have been overthrown, the article argues, both market liberals and the statist left are likely to be disappointed by developments. This analysis serves as a welcome antidote to the enthusiastic accounts put forward by both mainstream liberals, who have seen the Arab Spring as a series of democratic bourgeois revolutions that will usher in parliamentary democracy, the rule of law and economic property, and the autonomists and left who see the uprisings in the Arab world as a manifestation of an emerging amorphous global anti-capitalist movement.