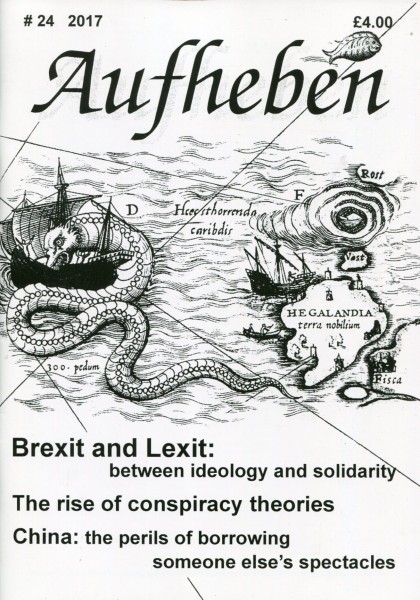 BREXIT MEANS… WHAT?
HAPLESS IDEOLOGY AND PRACTICAL CONSEQUENCES
A number of left groups and individuals campaigned for the UK to leave the European Union in the recent referendum. We argue that the Brexit campaign, and the referendum itself, its results and its implementation, have been one with a victory of the ruling class against us. The implementation of Brexit will negatively affect solidarity among workers and radical protesters, setting back our strength and potentials to overturn capitalism. Many people in the radical left were blinded by the ideological forms of our capitalist relations, the reification of our human interactions, to the point of accepting a victory of the far right with acquiescence, or even collaborating with it.

THE RISE OF CONSPIRACY THEORIES:
REIFICATION OF DEFEAT AS THE BASIS OF EXPLANATION
Conspiracy theories have become more widespread in recent years. As populist explanations, they offer themselves as radical analyses of ‘the powerful’ – i.e., the operation of capital and its political expressions. One of the features that is interesting about such conspiracy theories therefore is that they reflect a critical impulse. We suggest that at least part of the reason for their upsurge (both in the past and in recent years) has to do with social conditions in which movements reflecting class struggles have declined or are seen to be defeated. We trace the rise of conspiracy theories historically and then focus on the most widespread such theory today – the idea that 9/11 was an inside job. We suggest that one factor in the sudden rise of 9/11 conspiracy theories was the failure and decline of the movement against the war in Iraq.

CHINA: THE PERILS OF BORROWING SOMEONE ELSE’S SPECTACLES
We argue that the transition facing China is the shift from the export of commodities to export of capital. This transition would mark a major step in transforming China from what we have termed a mere epicentre in the global economy to its establishment as a distinct second pole of within the global accumulation capital – an emerging antipode to that of the US. The group Chuǎng argue that recent Aufheben analyses are ‘too optimistic’ concerning China’s ability to maintain economic growth rates and fuel global capital accumulation. We reproduce their article as an Intake. In our response, we contend Chuǎng are unable even to recognise what we are suggesting let alone argue against it. This is because in making their analysis of the current economic situation in China, they have borrowed the spectacles of neo-liberal economics. They have thereby inadvertently adopted a myopic and ideologically circumscribed perspective that contains crucial blind-spots.