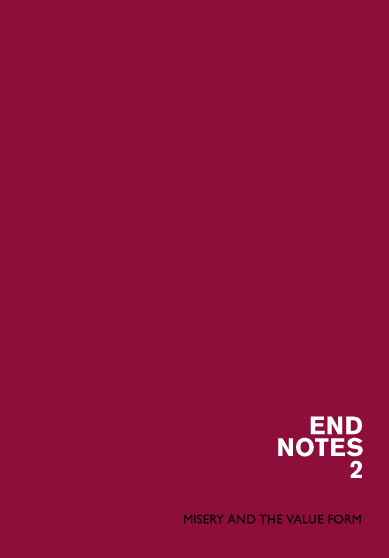 Misery and the Value Form

1.
Crisis in the Class Relation

Taking the capitalist class relation as a self-reproducing whole, the horizon of its overcoming appears as an invariant aspect of this whole, albeit one with a historically variant quality. Surplus population and capital's basic problem of labour characterise core dynamics underlying the shift in this horizon beyond the old programme of workers' power.

A re-reading and historical interpretation of Marx's “general law of accumulation”— the tendency for the expanded reproduction of capital to throw off more labour than it absorbs—in light of the growth of surplus populations and surplus capital in the world today.

3.
Notes on the New Housing Question

Preliminary materials for a theory of home-ownership, credit, and housework in the post-war US economy. How is the fundamental separation between production and reproduction transformed when the home becomes the commodity through which all others are sold?

The theory of communisation and Marxian value-form theory emerge from the same historical moment, mutually complement each other, and point towards the same radical conception of revolution as the immediate transformation of social relations, one in which we cease to constitute value and it ceases to constitute us.

A reconstruction of the systematic dialectic of capital as a dialectic of class struggle. The forms of value which are constituted by and regulate social practice are totalising and self-reproducing through the subsumption of labour under capital. The totality so constituted is inwardly contradictory, and ultimately self-undermining: capitalist accumulation is a moving contradiction, i.e. a historical contradiction, between capital and proletariat.

6.
The History of Subsumption

The philosophical/logical concept of subsumption is employed in various periodisations of capitalist society, such as those of Théorie Communiste, Jacques Camatte, and Antonio Negri. A critical examination of this concept and its historical uses.

Worker's enquiry in the cynical mode: the unrevolutionary working life of the web developer.