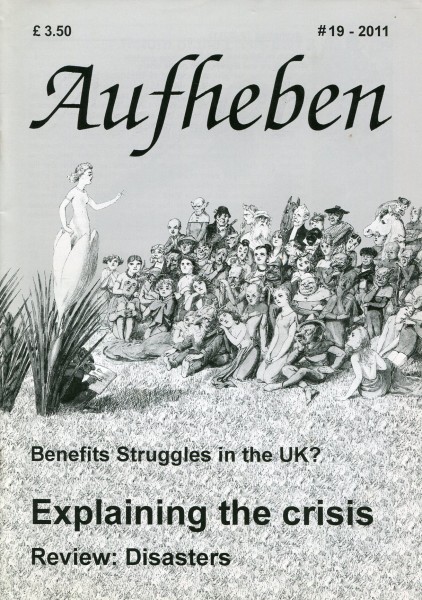 Description Evaluations 0
Description
Contents Return of the crisis part 2: The nature and significance of the crisis In the last... more
Close menu
Product information "Aufheben #19-2011"

Return of the crisis part 2: The nature and significance of the crisis
In the last issue, we gave an account of the immediately apparent causes and unfolding of the recent financial crisis, which began with the ‘credit crunch’ in the summer of 2007 and which culminated with near meltdown of the global financial system following the collapse of Lehman Brothers in the autumn of 2008. Here, in Part II of our article, we step back to consider the nature and significance of this crisis by looking at its deeper and longer term causes.

The renewed imposition of work in the era of austerity: Prospects for resistance
Before the crisis of 2008, the New Labour government had launched renewed efforts to impose work with the ‘Welfare Reforms’ of 2007-9. These reforms were aimed at forcing the sick, lone parents, the elderly and the long-term unemployed to compete on the labour market. With the crisis and then the election of the new coalition government, these reforms have been intensified, with actual cuts to benefit rates as part of a larger austerity programme that is threatening mass job losses. These proposals have now triggered a substantial response from the left, and this article analyses the current situation and its contradictions. From here we consider the question of whether a mass movement against welfare cuts is possible.

Earthquakes, crack-heads and utopias. Review article: A paradise built in hell: The extraordinary communities that arise in disasters by Rebecca Solnit
Can communities of resilience become communities of resistance? In this article we take John Holloway’s recent book Crack capitalism as the jumping off and landing point for a review of another, connected, book, Rebecca Solnit’s A paradise built in hell. Solnit’s six case studies of spontaneous communities of mutual aid arising from disasters – including the San Francisco earthquake of 1906, 9-11, and Hurricane Katrina – turn on its head the notion that emergencies and disasters are a case of ‘everyone for himself’. They each offer an inspirational glimpse of how life could be. Holloway appears to go further by describing these accidental communities as one example of the ‘cracks’ that could lead to social change. Disturbingly however, his idea of change can too often sound like co-existence within the interstices of capitalism. Solnit’s less grandiloquent account gives a partial explanation for why we should not see ‘communities in disaster’ as catalysts for worldwide revolution.