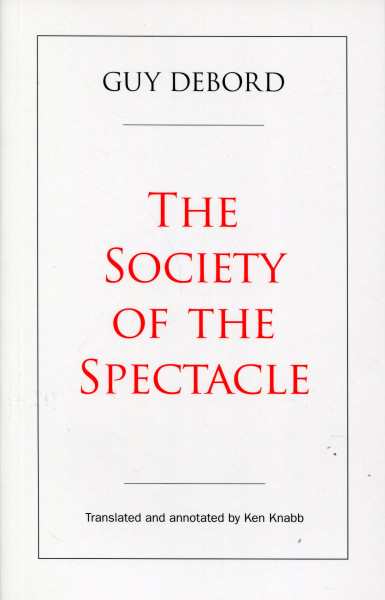 This product is currently not available.
Please inform me as soon as the product is available again.
€11.00 *

The Society of the Spectacle, originally published in Paris in 1967, has been translated into more than twenty other languages and is arguably the most important radical book of the twentieth century. This is the first edition in any language to include extensive annotations, clarifying the historical allusions and revealing the sources of Debord’s “détournements.”
Contrary to popular misconceptions, Debord’s book is neither an ivory tower “philosophical” discourse nor a mere expression of “protest.” It is a carefully considered effort to clarify the most fundamental tendencies and contradictions of the society in which we find ourselves. This makes it more of a challenge, but it is also why it remains so pertinent nearly half a century after its original publication while countless other social theories and intellectual fads have come and gone.
It has, in fact, become even more pertinent than ever, because the spectacle has become more all-pervading than ever — to the point that it is almost universally taken for granted. Most people today have scarcely any awareness of pre-spectacle history, let alone of anti-spectacle possibilities. As Debord noted in his follow-up work, Comments on the Society of the Spectacle (1988), “spectacular domination has succeeded in raising an entire generation molded to its laws.”