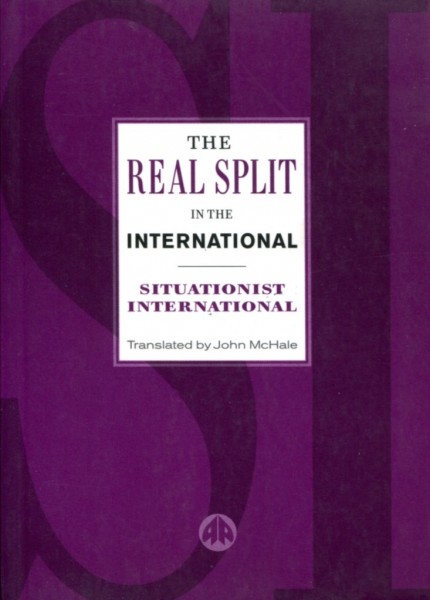 Description Evaluations 0
Description
Exploding as politically revolutionary at the heart of the Paris 1968 uprisings, the... more
Close menu
Product information "Situationist International: The Real Split in the International"

Exploding as politically revolutionary at the heart of the Paris 1968 uprisings, the Situationist International has proved a tenaciously compelling radical movement in terms of asthetics and political theory.

This crucially important book is not only a philosophical landmark, it is also a cult classic that has has established the Situationist movement -- of which Debord was the key member -- as one of the most influential of the twentieth century.

This new translation by John McHale is the first officially authorised in English. The book has previously been available only in underground or online formats, so McHale's work promises to bring the work of the Situationists to an even wider audience.

The Real Split in the International sees Debord not only evaluate the movement as a whole, but also signal the end of it. For him, it had become clear that the Situationist's success had produced -- within its own ranks as well as outside them -- a host of fans and 'onlookers' who amounted to little more than consumers of a radicality that had become fashionable. In this way the movement had begun to encompass the very 'society of the spectacle' that the Situationists had challenged. There was a danger that Situationist theory could turn into ideology -- Debord's reaction was to break up the movement.

John McHale has translated Alice Becker-Ho's Les Princes du Jargon, her L'Essence du Jargon and Guy Debord's Panégyrique Volume 2. He lives in London.Guy Debord was a revolutionary theorist, a film-maker, the indisputable head of the Situationists, and a key figure in the constellation of French theorists and intellectuals from the 1960s onwards. He committed suicide in 1995 at the age of 63. Identifying everyday life as the terrain of revolutionary activity, he added new and apposite dimensions to Marxist thinking in the late twentieth century:The Society of the Spectacle, his seminal work, characterised a society resting not only on the alienated labour of workers, but on the alienated lives of spectators.