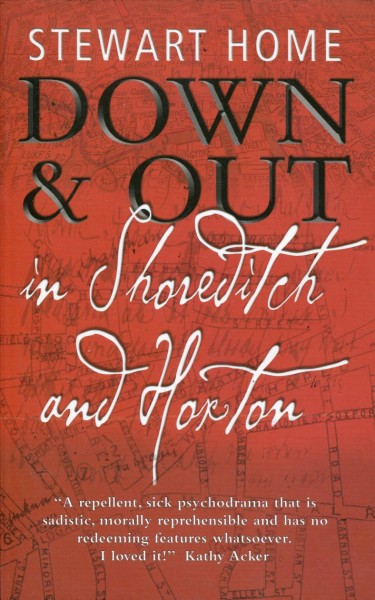 The back cover blurb:

Down & Out in Shoreditch & Hoxton is a slice-and-dice splatter novel in which time-travelling streetwalkers hump their way from the trendy east London of today back to the skid row mutilations of the Jack the Ripper era.

As gentrification forces the hookers from their age-old beat along Commercial and Wentworth Streets, they don Victorian Widows' weeds and ply their trade in local graveyards. Amid these psychogeographical dislocations, warm blood isn't the only thing that gets sucked by the night creatures who haunt Home's anti-narrative. This is without doubt the weirdest book ever written, the illegitimate offspring of the Marquis De Sade balling a post-modern literary extremist at a ladies of gangster rap convention. (It also reveals the true identity of Jack the Ripper.)

Alternatively:
Down & Out In Shoreditch & Hoxton is a quirky book that provides a very different picture of what is now London’s most fashionable quarter to Monica Ali’s Brick Lane. Although it is not a work of realism, it does benefit from the fact that for many years I lived on a council estate a couple of minutes walk from Brick Lane.

This book is both shorter and denser than Monica Ali’s novel since it self-consciously fuses poetry and prose. It was generated using the restriction that every paragraph should be exactly 100 words long. So what I’ve produced is both a novel and a prose poem. It is also simultaneously subtle and gross, lucid and outrageous, profound and glib.

In this book I look at how gentrification over the past few years has transformed Shoreditch and Hoxton. One of the most visible signs of this is the way in which prostitutes have been shifted around as pressure has been put on them to leave the area. There are literary references to prostitution in the locale going back four hundred years and the book is informed by both this history and the more general history of the representation of prostitutes in English fiction. In the book I imagine prostitutes ultimately being forced off local streets and into Tower Hamlets Cemetery where they are able to plough their trade unmolested by the police after disguising themselves in widow’s weeds. My interest in prostitution emerges at least partially from the centrality of 'the whore' as an iconic figure within modernist culture.

The heart of the book is a parody of de Sade in which a succession of prostitutes try to fuck a john to death. Other literary figures who play an important role in the novel include William Burroughs who is revealed as having mastered time travel prior to his death and who I am therefore able to finger as the 'real' Jack The Ripper. Among other things this solution to the riddle of The Ripper’s identity is intended to illustrate the absurdity of much discourse on the subject and the ways in which a culture predicated on celebrity places a greater value on the activities of a serial killer than the lives of his victims.

In its earlier parts the book is about consciousness whereas towards the end it slips into sleep and death. Thus since this is a work in which form and content are self-consciously fused, as the female narrator describes sleepwalking, the prose is made to stumble. Down & Out In Shoreditch & Hoxton is a book in which there is something to delight and offend everybody. This is the perfect read for anyone fed up with bland novels and who wants to try something different. There sheer oddity of the book ensures it will appeal to anyone wanting a change from their usual literary diet.