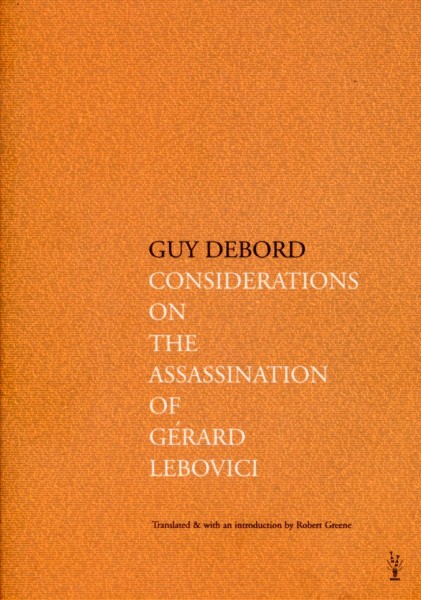 Description Evaluations 0
Description
Guy Debord (1931-1994) was the leading light in the Situationist International. He and the... more
Close menu
Product information "Guy Debord: Considerations on the Assassination of Gérard Lebovici"

Guy Debord (1931-1994) was the leading light in the Situationist International. He and the group were the first to criticize and comment on the role of the consumer in Western society. If Dada was an artistic movement that somehow pushed its artistic values into the political arena, then the Situationists were political and urban theorists who transformed politics into an art form. Debord’s masterpiece "Society of the Spectacle" is a stunning and witty critique on contemporary society where the workweek and consumerism alienate the individual. "Considerations on the Assassination of Gerard Lebovici" is a book-length rant and a confrontational stance against the French media with regards to the murder of his good friend and financial supporter Gerard Lebovici. In 1984 Lebovici was called away from an appointment and three days later the police found his body behind the steering wheel of his Renault with four bullet wounds to the back of his head, in a vacant parking lot in Paris. Lebovici was an inventive businessman, movie producer, publisher, and a major financial supporter of Situationist activity -including ownership of a movie theater that screened the films of Debord and other Situationists. It's suspected that gangsters killed Lebovici, although to this day the murderer(s) have never been found. That didn't stop certain groups in the media connecting Lebovici's death with the Situationists. In this passionate rebuttal, Debord lashes out with great humor and intensity against the media and defends his good friend Gerard Lebovici. This book should not be seen as an account of an isolated, almost forgotten murder case, but as a general call-to-arms with respect to how the media controls and rewrites its ‘facts’.