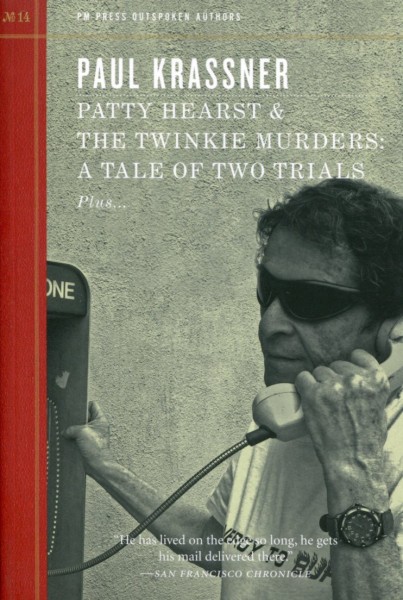 Patty Hearst & The Twinkie Murders is a darkly satiric take on two of the most famous cases of our era: the kidnapping of heiress Patty Hearst, and the shocking assassination of San Francisco Mayor George Moscone and gay leader Harvey Milk. As a reporter for the Berkeley Barb, Paul Krassner was ringside at the spectacular California trials. Krassner's deadpan, hilarious style captures the nightmare reality behind the absurdities of the courtroom circus.

Using his infamous satiric pen and investigative chops, Krassner gets to the truth behind the events: the role of the police and FBI, the real deal with Patty and the SLA, and what really happened in Patty’s infamous closet.

Plus: A merciless exposé of the "Taliban" wing of the gay movement and their scandalous attacks on alt-rock star Michelle Shocked.

Also featured is our Outspoken Interview, an irreverent and fascinating romp through the secret history of America's radical underground. Names will be named.

“Krassner is an expert at ferreting out hypocrisy and absurdism from the more solemn crannies of American culture.”
—New York Times

“Krassner has the uncanny ability to alter your perceptions permanently.”
—Los Angeles Times

“The FBI was right—this man is dangerous—and funny, and necessary.”
—George Carlin

“As soon as we decided to create the Huffington Post, I knew I wanted Paul Krassner involved.”
—Arianna Huffington

Creator of the Realist, the legendary underground magazine that many credit as the beginning of the radical "new journalism" of the 1960s, Paul Krassner is an immortal, immoral, revered, and reviled icon of American humor. Wielding satire as a weapon, he began the assault on middle America known today as the "counterculture" and is still a hero to radicals and a menace to the establishment. He now lives near Palm Springs disguised as an old man.