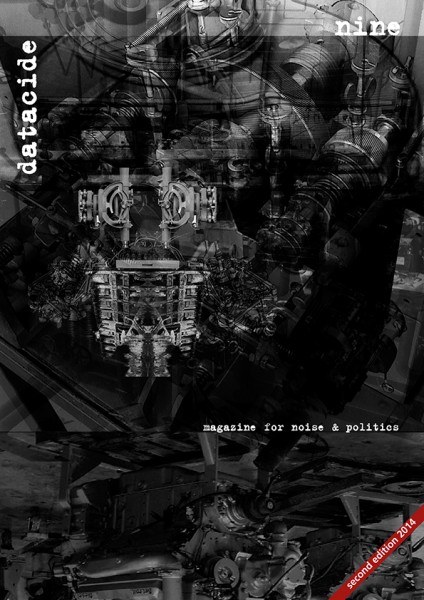 This product is currently not available.
€5.00 *

Datacide Nine appeared in spring 2006. This first reprint of an earlier issue features the complete text of the original edition, but has been newly laid out and arranged. The original editorial (opposite page) is followed by the main features, while the scene reports were moved to the back of the issue. We’re happy to have this long deleted issue back in print; it features some of the most read articles on the datacide web site that are still relevant and of interest today. The original editorial reflects the particular historical situation in which the issue originally appeared: The repression against Teknivals as well as the particular (wider) political situations, while technological developments and economic problems are covered in passing. Out of the ensuing crisis of the already completely marginalized counter culture developed the desire to start something new, and we announced that Datacide Ten would be the last issue. This has of course not been the case. Instead, we felt re-invigorated enough after the 2008 issue of Datacide Ten and the accompanying conference to keep going, and the last few years have seen a consolidation of our release schedule and an expansion in size and content.October 12, 2013 saw the release of the new issue, number Thirteen, and yet again it is the biggest issue so far. There was an event with talks, concerts and party in Berlin on that day. We were present at the Anarchist Bookfair in London on October 19. The next day we did a small launch event in London. Datacide was presented for the first time in the U.S. with a soliparty on November 15 and a conference on November 17. Datacide tabled at the Los Angeles Eastside Zine Market on December 8, and the Art Book Fair from January 30-February 3, 2014. Rather than trying to increase the frequency of Datacide, we would like to complement it with additional books and pamphlets.Please consider taking out a subscription to help us achieve these aims!

page 12....(Anonymous): You Must Help Yourself - Neo-Liberal Geographies and Worker Insurgency in Osaka

page 18.....Stewart Home: The Eclipse and Re-Emergence of the Bildungsroman

page 20.....Christoph Fringeli: Breggin/Cohen: Your Drug May Be Your Problem
music

page 27.....Christoph Fringeli: Anti-Semitism from Beyond the Grave - Muslimgauze’s Jihad

page 28.....Secessionist Outernational to Ourganisation - 1st May in December