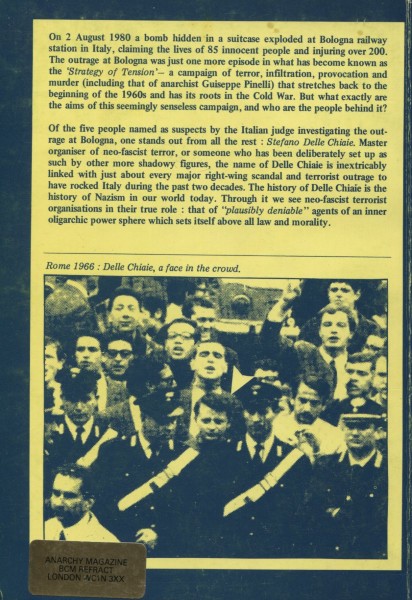 Classic account fo the fascist terrorist underground of the 70's by Stuart Christie, first published in 1984.

Unlike Marcello Clerici, the amoral secret agent at the centre of Alberto Moravia's novel Il Conformista, most Italian fascists were not content to simply melt away with the death of Mussolini in 1945. Indeed, as America struggled to “contain” Communism and maintain its strategic supremacy in the Mediterranean, Italian fascists were actively courted by the American and Italian governments in order to counter, by any means necessary, the threat of an resurgent Partito Communista Italia (PCI). The consequences of this murderous collusion, of which delle Chiaie was but a part, reaches into the very heart of Italian society and the “inner oligarchic power sphere- above all law and morality” which governs it.

Spanning two decades, and stretching from Europe to the killing fields of Latin America, delle Chiaie's murderous career reached a bloody climax in August 1980 with the bombing of the Bologna railway station which left 85 people dead and over 200 injured. However, these seemingly wanton acts of terrorism were not the result of random, nihilistic savagery but part of a “strategy of tension” - a programme of state sponsored, fascist terror designed to be blamed specifically on the Left. Calculated to create fear, panic and a general clamour for the restitution of law and order, the “strategy of tension” would allow for the imposition of an authoritarian regime upon Italy, foreclosing any opening to the Left, now discredited by its supposed reputation for terrorism.

During the “Hot Autumn” of 1968, the mild resurgence of working class power across Italy and France elicited a hysterical response from Italy's dominant classes. Anxious to put Italy “back on track” sectors of the Italian establishment adopted the savage counterinsurgency tactics employed by the French army in Indo-China and Algeria in order to wage its own “unorthodox” war against internal dissent.

In this capacity delle Chiaie became the “mater organiser of terror.” A disciple of fascist “spiritual” ideologue Julius Evola, (“our Marcuse, only better”), delle Chiaie detested “bourgeois morality.” As one leaflet issued by his Avanguardia Nazionaledeclared: “Before setting out our men are morally prepared so that they learn to break bones even of somebody who kneels down and cries.” Implicated in many of the worst terrorist outrages in recent Italian history, delle Chiaie worked covertly at the behest of certain sectors of the intelligence service to implement the “strategy of tension.” Whether or not his followers understood that their own “revolutionary” agenda was being manipulated by the state is neither here nor there. Fascist infiltration, provocation and destabilisation of a range of left-wing and anarchist groups, who were framed for the subsequent violence, functioned within the overarching framework of the “strategy of tension” which co-opted fascism's lethal impulses for its own ends. The most notorious of these episodes, the Piazza Fontana bombing, led to the murder Black Cross organiser Giuseppe Pinelli whose death was immortalised by Dario Fo inAccidental Death of an Anarchist.

Given the conspiratorial silences and beguiling ambiguities of Italian politics, charting the pista nera (black path) represents no mean task. The scope and intensity of fascist terrorism in Italy represents a unique phenomenon in annals of European history. Whilst Christie occasionally oversimplifies the complexity of the diffuse relationship between Italian fascism and the state, thus underestimating fascism's room for manoeuvre, his examination of state complicity in these acts of terror has been borne out by the work of numerous Parliamentary enquiries. Thus his book remains a compelling primer for those interested in the political and psychological use of terrorism in Italy.

Christie published this biography in 1984. Three years later delle Chiaie was extradited from Venezuela. He was granted “special judicial privileges” and cleared of all charges.