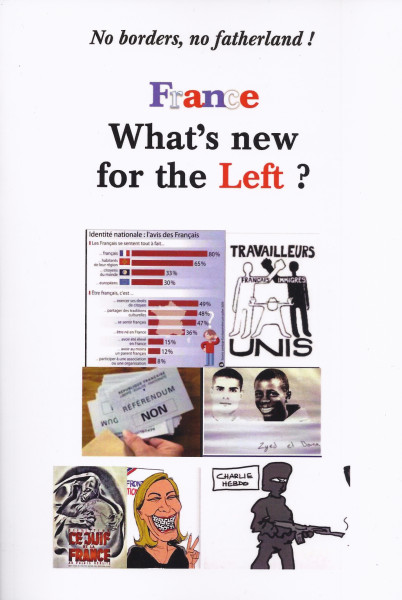 Description Evaluations 0
Description
The collection of articles offers a socialist point of view about some recent developments and... more
Close menu
Product information "No borders, no fatherland!: France - What's new for the Left?"

The collection of articles offers a socialist point of view about some recent developments and events which occured in France in the fifteen years 2002-2017. It does not pretend to give a detailed account of all the problems recently debated in the Hexagon, just some hints to get rid of a few political clichés which dominate the revolutionary Left.

Limits of anti-Zionism * The Hijab and the Left * 150 years on immigration * Secularism * "Citoyennisme"? Fatal attraction * Tariq Ramadan * The sad farce of the "no victory" * "Dancing with the wolves" - the riots in France * "The Republic's Natives", the debate about French colonialism and its consequnces * French working class, migrants, racism and the building of French national ideology * Trotskyists, neo-Trotskyists and dinosaurs * Charlie Hebdo, "Muslims", and how to defend freedom of expression (2012) * Left anti-Semitism * The National Front and its influence among French workers * Anti-Semitism and anti-Muslim racism... and more!

Read a review of this book in Datacide HERE.