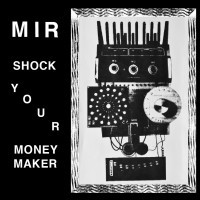 Description Evaluations 0
Description
Mir, the final bastion of Noise, have been given many labels since their inception in 2005.... more
Close menu
Product information "MIR: Shock Your Moneymaker"

Mir, the final bastion of Noise, have been given many labels since their inception in 2005. Stylistically, they are working on a kind of non-music, an open framework between industrial rock, No Wave, Japan Noise, Drone, Krautrock, anarchic Grind and Minimal Music. Or, in the words of the press: «Mir explore the smoking ruins of Avant-garde with punk- rock panache». Their sound has been defined as «the perfect dance-music for Klingons».
Just Iike its predecessor, 2009‘s self-titled LP, «Shock Your Moneymaker» was created in an unfiltered live setting. The recordings at Kaserne venue in Basel were monitored, mixed and produced by Alex Buess (16-17, God, Ice). Mir‘s usual line-up consists of Daniel Buess on percussions, Papiro on string, wind and synthesis instruments, and Michael Zaugg on synths, electronics, keys and effects. For the Kaserne performance, they were joined by percussionists Roman Bruderer and Chris Jaeger Brown. The duo‘s tabla-like playing adds a furious, repetitive element to the band‘s music, an effect that becomes even more striking when Papiro brings the Indian Shehnai flute into the mix. With Mir, things always end up going a little further than planned. Peace is different, Mir goes like this.