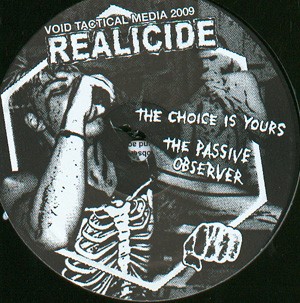 This product is currently not available.
€9.00 *

A collaborative experiment with hard broken beat imprint Void Tactical Media in Detroit, “The Choice Is Yours” is the first Realicide EP designed to be slightly more adherent for creative DJ use. This record breaks away from an over-saturated montage of mangled speedcore anxiety found on other Realicide releases, in favor of 4 longer, more straight-forward bastardized gabber punk anthems which largely serve as extended sequels to songs originally found on the “Resisting The Viral Self” LP earlier in 2009. The title track is an elaboration on the 2008 song “Autonomy”, created by Robert Inhuman, Evolve, and Jim Swill. A2 “The Passive Observer” is an elaboration on the 2007 song “The Audience Sucks”, with one of the absolute best Vankmen gabber beats backing Inhuman and Swill. B1 track “No War Can Be Won” is a Crass-inspired remix combining elements of previous songs “Neutralizing Opiate”, “Autonomy”, and “No Xenophobic HxC”. And B2 is a sequel to Mavis Concave’s electribe anthem “Open Eyes”, with extended lyrics by Inhuman and Swill. Overtly combative yet urgently outreaching, Realicide represents a minority contingent of electronic-driven punx in post-911 America, progressing a personalized vision apart from any dogmatic precedents established in hardcore. Screenprinted covers + insert posters. 1st Edition: 300