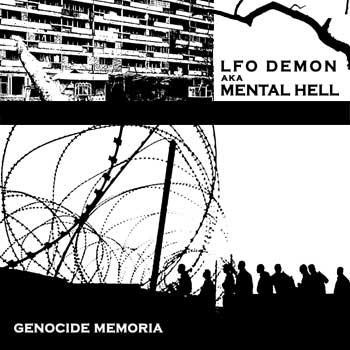 60 minutes and 12 tracks dark dub / downbeat breaks / electronica. LFO DEMON released various records yet ranging from ragga orientated breakcore to dark technoid hardcore- this release is miles away from that style and shows his fondness for slow, dismal hiphop beats and dark, little melodies. He worked 2 years on this album before it got released in 2004 - and you definitely hear the effort that was put in this record. It is no short-lived music for one summer but some outstanding piece of artistic expression. This is also backed by 12 texts on the sleeve of the album. The order of the tracks follows a concept: there are short texts for each track on the flipside of the cover reflecting political and philosophic issues from wars in the 1990s to the role of fear as a "lubricating oil" in modern societies. All of them are described from different viewpoints that change from the scientist, the politician, the artist and the individual.

The whole idea of this album is best to be described as contemplative: it is not pathetic but an individual reflection of some - mostly dark- parts of human existence. This approach is different from moaning by not remaining in a state of misery but staying in some proper distance through the eye of the critic. On the other hand itï¿½s also not the approach to stay in a ivory tower but to engage and encourage others to get involved with something: but with active reflection and no blind acceptance of any agenda. So there are references to political debates like the one on the war against Afghanistan in 2001 or the one on "Empire" by Michael Hardt/ Antonio Negri. This is done without telling absolute truths but by putting any certainty into question.

Also the music reflects those viewpoints: This album doesnï¿½t follow the tradition of an existing genre but a multitude of various musical influences. There are samples of classical strings, of dub-orientated elements or technoid synthesizers to create a unique interpretation of those elements. The beat structure is based mostly on variations of hip hop beats: there are either oldskoolish breaks like in "Black Soul Bosnia", Kick+Snare patterns in "Heroin Sehnsucht" and technoid-dub beats like in "One night in Kabul".