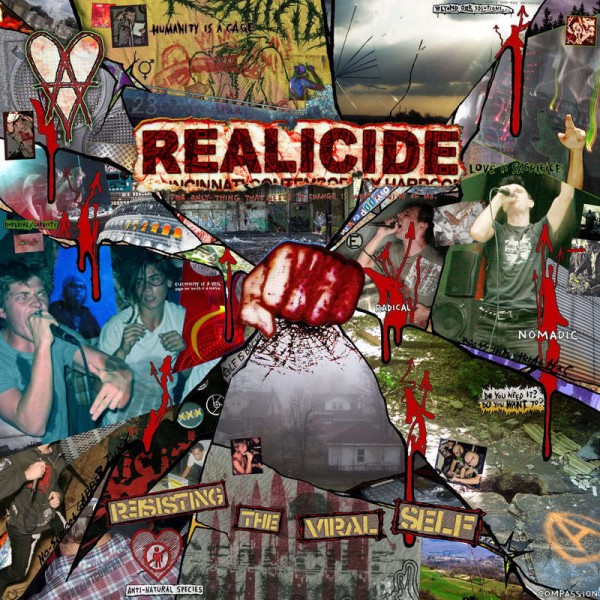 "Resisting The Viral Self" is a rare circumstance of Realicide finally completing an extensive studio album of a highly collaborative nature. In contrast to the project's extensive output of live bootlegs and other very rough material, here is a very defined and focused collective energy from artists across the US throughout late 2007 until early 2009. This body of work includes the lyrics and voices of Robert Inhuman and Jim Swill; the hardware and software electronic music of Vankmen, Ryan Faris (of Capital Hemorrhage), Evolve, and Steven Cano (tik///tik); additional sampling by Simon Severe; and mastered by Mavis Concave. Sonically, "Resisting The Viral Self" ranges from Realicide's established style of very abrasive gabber punk, inspired by certain sects of harsh noise and classic digital hardcore, yet venturing into other means at times, such as dark ambient soundscapes facilitating spoken tracks and delicate sound collages. Lyrically, the album claims allegiance most strongly to the roots of Anarcho-punk and other combative, yet ultimately constructive, efforts in promoting a lifestyle based in equality and the courage to experiment regardless of social pressures (especially against these social pressures). The 12" vinyl holds the essentials of the album, at 17 minutes each side, but the CD format has allowed the material to be doubled, at 48 tracks and filling the disc with as much raw hardcore and industrial mania as possible. Both versions of the album are available in full-color printed jackets, featuring artwork by Robert Inhuman, and are accompanied by an extensive zine. Though a modest stack of xeroxed text and drawings, this zine is completely supplemental to the music of "Resisting The Viral Self". In addition to all technical credits and lyrics, essays elaborating on the content of almost every track are presented, along with essays regarding the ethical philosophies and policies surrounding Realicide in every aspect of its operation. Vinyl stickers are also included with both CD and LP versions. For anyone who has an interest in Realicide and has waited through years of many less coherent bootleg releases, or anyone who has been increasingly hungry for a band that can very directly utilize electronic hardcore as a vehicle for radical and socio-political propaganda, this is an album that can give you what you've been hunting for - with a terrifying vehemence yet an unwavering message of compassion and self-sacrifice. FIGHT THIS HELL. REDEFINE HARDCORE. 29 March 2009, for Realicide Youth Records (1st Edition: 500 LP & 1,000 CD)