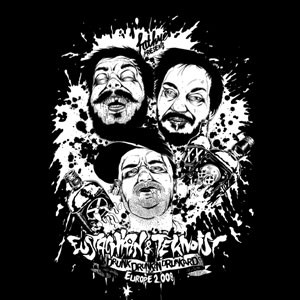 Here's the original info blurb from 2008: Eustachian is coming back to Europe and this time with UK Dance Floor Smasher "The Teknoist." The Teknoist and Eustachian have a split 12" coming out on Parasite's Legendary Label "Death$ucker Records." They both have tons of new releases coming up in 2008, on Peace Off, Ad Noiseam, Planet-Mu and Bong-ra's up coming label "Kriss Records" to name a few.

Eustachian is a Florida born project that morphed into a National event, which now resides in the Barbary Coast of California. Eustachian focuses their efforts on the Savant bridge of Grind core, and Electronic infused nightmare ballads. After a long awaited debut, Eustachian gave birth to its colonial fringed Horror-core recording label, called Fathme (pronounced fathom).