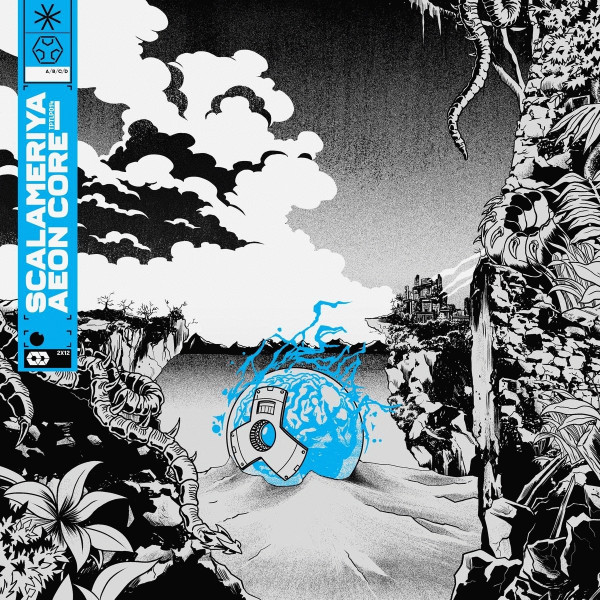 Scalameriya returns to Perc Trax with his new album 'Aeon Core' - the most definitive statement of his highly individual sound to date. Originally debuting on Perc Trax in 2016 in collaboration with VSK he has since cemented his status at the label with three further Perc Trax EPs 'Kepslok' (2016), 'Hellzone Megapunk' (2018) and 'Blueprint For Disaster' (2020).

Now 'Aeon Core' is upon us and sees Scalameriya extend his sound across 11 immaculately produced tracks showcasing a cybernetic, synthetic techno sound that still has a warm heart at its core. From the tough beats and warped vocals of 'Kiti Kimera' to the collapsing synth riffs of 'Elder Venus' to the punishing closing statement that is 'Warbeast' a track pushing up the Scalameriya BPM like never before, this is an album than perfectly balances intricacy, rhythm and power.

As with the last two Scalameriya EPs on Perc Trax the source illustration is an exclusive commissioned work by New Tasty with all editions of the album put together by Perc Trax design hero Adult Art Club. The distinctive illustration further solidifies the connection between the visual and sonic aesthetics of Scalameriya's Perc Trax releases to the point now where it feels like one cannot exist without the other. The album was mastered by Matt Colton at Metropolis Studios in London and will be released as a 2 x 12" vinyl release, a CD album plus download and streaming formats.