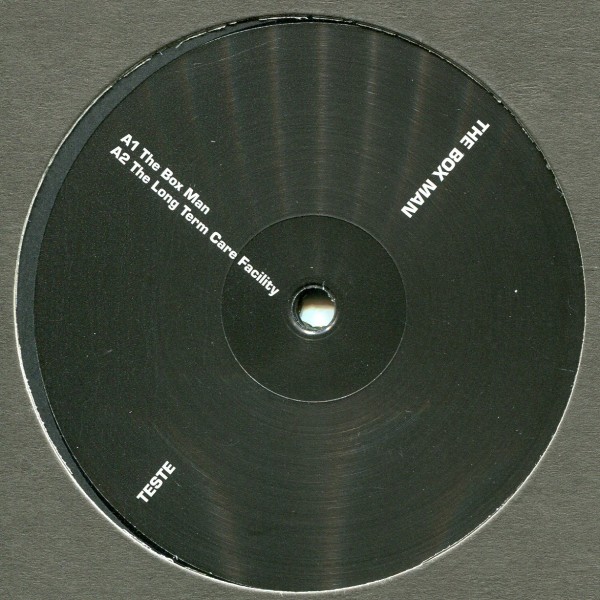 Teste returns with The Box Man, a five-track EP that marks their first release of original material in 25 years. Formed during the early nineties in Hamilton, Ontario, they put out only three official records between 1992-1993 on Probe Records, most notably “The Wipe,” which is regarded as a genre defining classic, while the follow-up “Regions” also served as a template for the ensuing sonics of contemporary techno. With only a handful of live actions, the final chaotic show (public disturbance) occurred for Pure in Glasgow 1994. Afterwards, the original Teste lineup of juvenile delinquents disbanded but unwittingly ended up defining the hypnotic and drugged out strains of today’s afterhours techno parties. The project vanished for decades until reactivating the chaos in 2014, promoting a slew of remixes “The Rewipes,” by artists such as Rrose and Terence Fixmer, on the Edit Select imprint.

Since then, original member David Foster, still at large as /ϟ/HUREN/ϟ/, has been slugging it out in the fringes with influential output on the seminal Zhark Recordings Berlin and has collaborated as O/H with Rich Oddie of Orphx. First meeting on Mayday 2017 in Berlin, a new alliance with Martin Maischein aka Goner formed. Goner is likewise a veteran with essential output under various monikers on imprints such as Force Inc., Editions Mego, and Hospital Productions. From that pairing, The Box Man came into being for the second release on BITE, the Berlin techno label run by Hayden Payne and Florian Engerling.

The Box Man picks up where Teste last left us with their revolutionary vision of techno and continues to further their interdimensional manifestation of insanity and formation. Pure techno serving as a method of psychic expulsion and self-reckoning. From the opening, the eponymous track approaches full panoramic throttle as metallic synths creep 360 degrees around the listener, setting the tone for panic and loss of cognitive control. Teste then moves into the stealthier outpatient techno rhythms of “The Long Term Care Facility” and “Thieves Are Operating In This Area”. The EP contrasts its propulsion with different interpretations of its blueprint. “Foaming At The Mouth” delves into Cabaret Voltaire-alike rhythm box violence until all is closed with the comedown melodies of “Lyubov”. Through highly adept methods of sound design and neural interpretation, Teste once again cuts apart reality with their music, expressing nightmares and visions via new rituals and mind control techno.