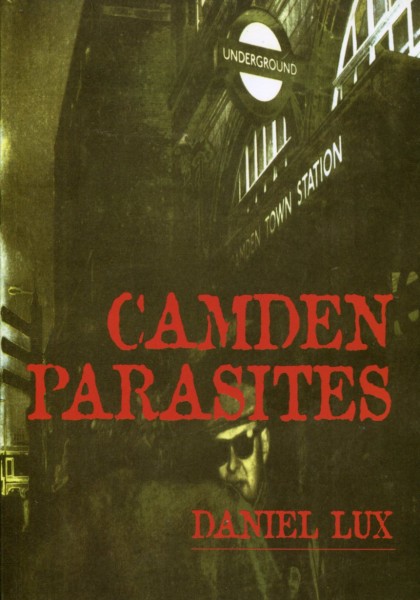 This product is currently not available.
Please inform me as soon as the product is available again.
€10.00 *

Emerging from a world of poverty, Danny soon discovers that his quick wits and forthright personality can gain him access to the well-heeled salons of Hampstead. As he explores the realities of the middle class way of life, one question comes to mind: who are the Camden parasites?

“I sometimes lay in the warm bath reflecting upon my misspent life. I’d lived the life of a star, girls flocking all around, drugs aplenty, yet without having to live onstage or have any achievement whatever…..I was just a thieving junkie living in a squat.”

Now receiving a long awaited re-print due to the book’s cult status and high demand, Camden Parasites is the real life autobiography of Danny Lux, long time heroin addict, con-man, petty thief and philanderer who died of an overdose just weeks before the first publication of his greatest achievement of all.

Written while resident at Arlington Road homeless hostel, the narrative charts Danny’s tragically short but turbulent life. From the extreme poverty of his childhood to his experiences of the world of extreme wealth in the social circles he penetrated.

Described as having ‘more vein-popping than Trainspotting’ Camden Parasites is a no-holds-barred roller-coaster ride through Danny’s first school-boy brushes with the law, introductions to the drugs, crime, theft, squatting and the early days of punk in London through to mental break-downs, addiction, hepatitis, homelessness & destitution. The only light ever shining at the end of his tunnel being the temporary comfort afforded by the daughters North West London’s privileged classes drawn to his quick wits and rough diamond charm like moths to a flame.

Irrepressible, unrepentant and unromanticised, Camden Parasites is possibly the most accurate depiction of a life spent in poverty and addicted to drugs as yet committed to print. Debunking the popular glamorised myth of the opium-addicted author as brutally as it depicts the endless cycle of unemployment, poverty, homelessness and the marginalised lifestyle it creates.

Dying from an overdose just two days before his 41st birthday, “Danny”, in the words of his brother Martin, “spent his entire adult life either on smack or trying to come off it.”

“His modus operandi was: find a posh girl, get her to fall in love with him…allow her to pay for everything and steal from her friends”

“He was an extreme drug abuser from an early age….articulate and charismatic, with a slimy charm which people found irresistible. He had absolutely no ambition whatsoever to do anything if any kind. He contracted hepatitis through dirty needles and was quite happy about that because he got more money through sickness benefit and the dole stopped hassling him. He was one of the greatest bullshitters who ever lived.”