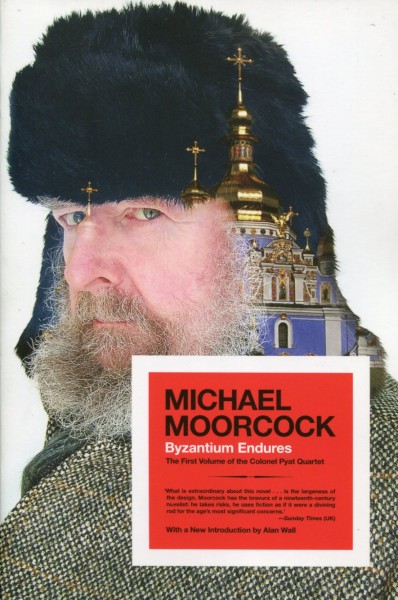 This product is currently not available.
Please inform me as soon as the product is available again.
€22.00 *

Published in 1981 to great critical acclaim—then condemned to the shadows and unavailable in the U.S. for thirty years—Byzantium Endures, the first of the Pyat Quartet, is not a book for the faint-hearted. It's the story of a cocaine addict, sexual adventurer, and obsessive anti-Semite whose epic journey from Leningrad to London connects him with scoundrels and heroes from Trotsky to Makhno, and whose career echoes that of the 20th century's descent into Fascism and total war.

This is Moorcock at his audacious, iconoclastic best: a grand sweeping overview of the events of the last century, as revealed in the secret journals of modern literature's most proudly unredeemable outlaw. This authoritative U.S. edition presents the author's final cut, restoring previously forbidden passages and deleted scenes

“What is extraordinary about this novel…is the largeness of the design. Moorcock has the bravura of a nineteeth-century novelist: he takes risks, he uses fiction as if it were a divining rod for the age’s most significant concerns. Here, in Byzantium Endures, he has taken possession of the early twentieth century, of a strange, dead civilization and recast them in a form which is highly charged without ceasing to be credible.”  —Peter Ackroyd, Sunday Times

"A tour de force, and an extraordinary one. Mr. Moorcock has created in Pyatnitski a wholly sympathetic and highly complicated rogue… There is much vigorous action here, along with a depth and an intellectuality, and humor and color and wit as well."  —The New Yorker

"Clearly the foundation on which a gigantic literary edifice will, in due course, be erected. While others build fictional molehills, Mr. Moorcock makes plans for great shimmering pyramids. But the footings of this particular edifice are intriguing and audacious enough to leave one hungry for more."  —John Naughton, Listener

Born in London in 1939, Michael Moorcock now lives in Texas. A prolific and award-winning writer with more than eighty works of fiction and nonfiction to his name, he is the creator of Elric, Jerry Cornelius, and Colonel Pyat amongst many other memorable characters.

Alan Wall is a novelist, short story writer, poet and essayist. His novels include Bless the Thief, The Lightning Cage, The School of Night, China, and Sylvie's Riddle. He is currently Professor of Writing and Literature at the University of Chester.