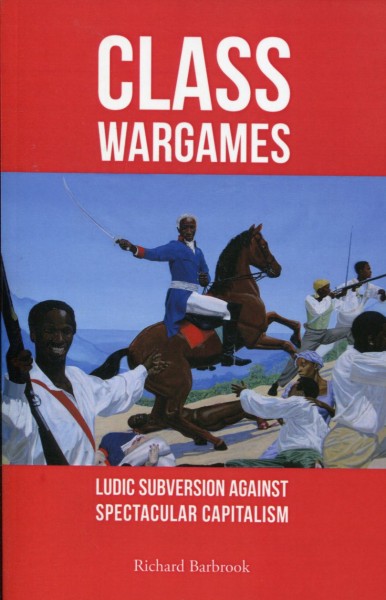 Description Evaluations 0
Description
Why should radicals be interested in playing wargames? Surely the Left can have no interest in... more
Close menu
Product information "Richard Barbrook: Class Wargames - Ludic Subversion Against Spectacular Capitalism"

Why should radicals be interested in playing wargames? Surely the Left can have no interest in such militarist fantasies? Yet, Guy Debord – the leader of the Situationist International – placed such importance on his invention of The Game of War described it as his most significant of his accomplishment.

Intrigued by this claim, a multinational group of artists, activists and academics formed Class Wargames to investigate the political and strategic lessons that could be learnt from playing his ludic experiment. While the ideas of the Situationists continue to be highly influential in the development of subversive art and politics, relatively little attention has been paid to their strategic orientation. Determined to correct this deficiency, Class Wargames is committed to exploring how Debord used the metaphor of the Napoleonic battlefield to propagate a Situationist analysis of modern culture and politics. Inspired by his example its members have also hacked other military simulations: H.G. Wells’ Little Wars; Chris Peers’ Reds versus Reds and Richard Borg’s Commands & Colors. Playing wargames is not a diversion from politics: it is the training ground of tomorrow’s communist insurgents.

Fusing together historical research on avant-garde artists, political revolutionaries and military theorists with narratives of five years of public performances, Class Wargames provides a strategic and tactical manual for subverting the economic, political and ideological hierarchies of early-21st century neoliberal capitalism. The knowledge required to create a truly human civilisation is there to be discovered on the game board!

“In a world become ‘game-ified’ against its will, Class Wargames provides the field manual for the only game that matters – that of history.” – McKenzie Wark, author of The Beach Beneath the Street and Gamer Theory.

“Richard Barbrook’s book is a jubilant manifesto for ludic art and revolution – each in service of the other – for a participatory future. By bringing Situationist disciplines into a contemporary context, he shows how thinkers, gamers, artists, hackers and educators can resist assimilation, and their creative endeavours escape perversion, by the deadly, dominating forces of neoliberalism.” – Ruth Catlow, co-founder of Furtherfield and creator of Rethinking Wargames

Bio: Richard Barbrook is Senior Lecturer in Politics at the University of Westminster and an active member of Class Wargames. He is the author of Imaginary Futures: From Thinking Machines to the Global Village, The Class of the New, and Media Freedom: The Contradictions of Communications in the Age of Modernity