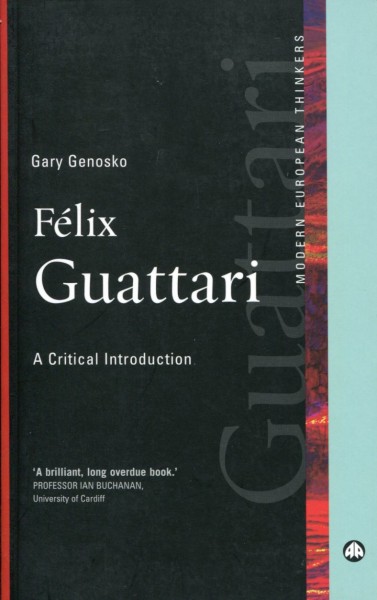 This is an introduction to the thought of the radical French thinker Félix Guattari. It is ideal for undergraduates and anyone studying political and cultural theory.

Guattari's main works were published in the 1970s and 1980s. His background was in psychoanalysis -- he was trained by Lacan and he practised as a psychoanalyst for much of his life. He developed a distinctive psychoanalytic method informed always by his revolutionary politics.

Guattari was actively involved in numerous political movements, from Trotskyism to Autonomism, tackling ecological and sexual politics along the way. A true believer in collectivity, much of his work was written in collaboration, most famously with Gilles Deleuze, with whom he wrote the hugely influential books Anti-Oedipus and A Thousand Plateaus. He also wrote with Antonio Negri and others.

This accessible introduction explores his highly original ideas -- including his ground-breaking conception of 'transversal politics' -- and the impact his concern with subjectivity had on wider political theory.

Gary Genosko is currently Canada Research Chair in Technoculture at Lakehead University in Canada. He is the author of two books on Félix Guattari, An Aberrant Introduction (2002) and The Party without Bosses: Lesson on Anti-Capitalism from Félix Guattari and Lula da Silva (2003). He has also edited The Guattari Reader (1996) and Deleuze and Guattari: Critical Assessments, 3 vols (2001)