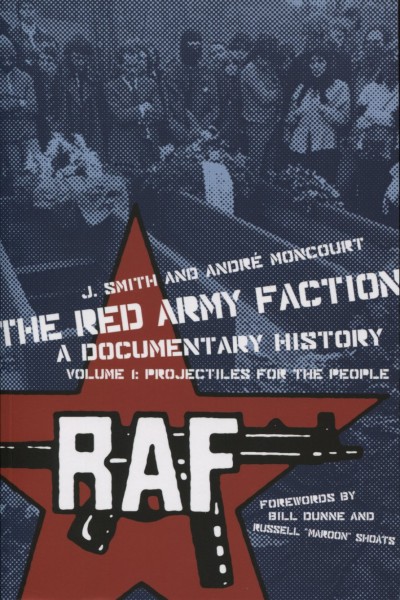 Description Evaluations 0
Description
The first in a two-volume series, this is by far the most in-depth political history of the Red... more
Close menu
Product information "J.Smith/André Moncourt: The Red Army Faction - A Documentary History, Vol.1 - Projectiles for the Pe"

The first in a two-volume series, this is by far the most in-depth political history of the Red Army Faction ever made available in English.

Projectiles for the People starts its story in the days following World War II, showing how American imperialism worked hand in glove with the old pro-Nazi ruling class, shaping West Germany into an authoritarian anti-communist bulwark and launching pad for its aggression against Third World nations. The volume also recounts the opposition that emerged from intellectuals, communists, independent leftists, and then – explosively – the radical student movement and countercultural revolt of the 1960s.

It was from this revolt that the Red Army Faction emerged, an underground organization devoted to carrying out armed attacks within the Federal Republic of Germany, in the view of establishing a tradition of illegal, guerilla resistance to imperialism and state repression. Through its bombs and manifestos the RAF confronted the state with opposition at a level many activists today might find difficult to imagine.

For the first time ever in English, this volume presents all of the manifestos and communiqués issued by the RAF between 1970 and 1977, from Andreas Baader’s prison break, through the 1972 May Offensive and the 1975 hostage-taking in Stockholm, to the desperate, and tragic, events of the “German Autumn” of 1977. The RAF’s three main manifestos – The Urban Guerilla Concept, Serve the People, and Black September – are included, as are important interviews with Spiegel and le Monde Diplomatique, and a number of communiqués and court statements explaining their actions.

Providing the background information that readers will require to understand the context in which these events occurred, separate thematic sections deal with the 1976 murder of Ulrike Meinhof in prison, the 1977 Stammheim murders, the extensive use of psychological operations and false-flag attacks to discredit the guerilla, the state’s use of sensory deprivation torture and isolation wings, and the prisoners’ resistance to this, through which they inspired their own supporters and others on the left to take the plunge into revolutionary action.

Drawing on both mainstream and movement sources, this book is intended as a contribution to the comrades of today – and to the comrades of tomorrow – both as testimony to those who struggled before and as an explanation as to how they saw the world, why they made the choices they made, and the price they were made to pay for having done so.

Of all the revolutionary organizations to have been forged by the so-called sixties generation, the German Red Army Faction has been perhaps the most mythologized and maligned. Here at last is their story, told in their own words through “official” communications, comprehensively assembled and available for the first time in English translation. This is essential material for anyone wishing to know what they did, why they did it, and to draw consequent lessons from their experience. —Ward Churchill author of On the Justice of Roosting Chickens